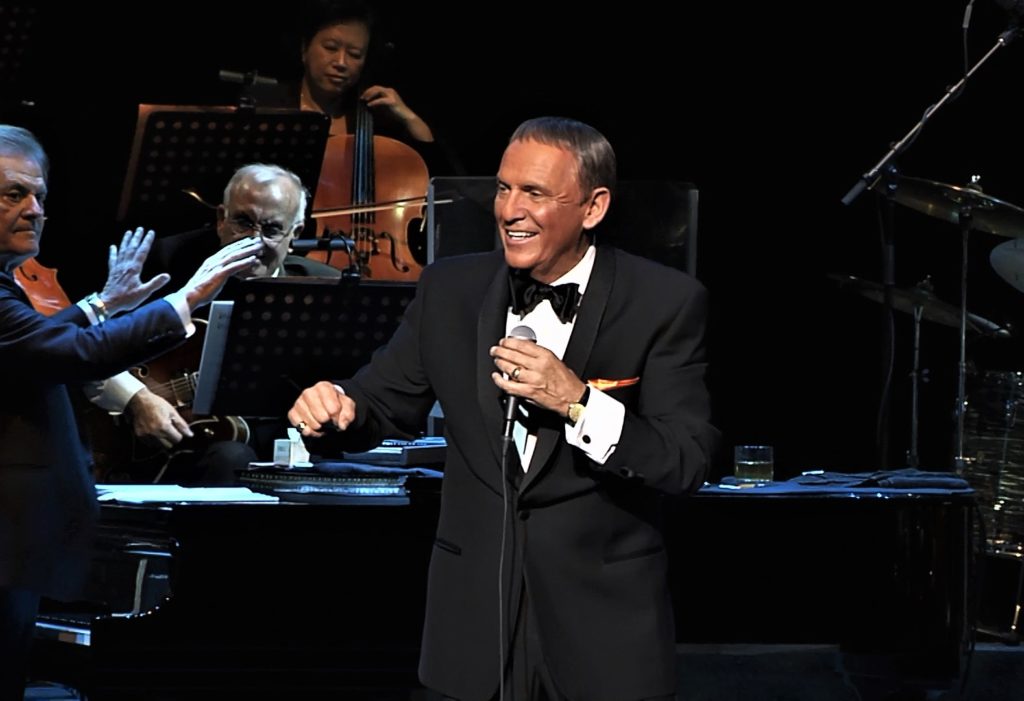 June 13, 2018 by tech@localschoice.org Frank the Man the Music
Frank Sinatra is long gone; he died 20 years ago in May.

The Warren native, a graduate of Center Line High School, provides the closest thing to the real Sinatra as you can get — at least judging by awards he’s won for his show, “Frank: The Man. The Music.” A singer and impressionist whose big break came opening for Nancy Sinatra during 1972 in Las Vegas, Anderson will take his show to HBO and Broadway soon — a pat on his back, but, he says, more an acknowledgment of Sinatra’s impact in his 50-year-plus career.

“Frank Sinatra was so brilliant and so good what he did,” Anderson, 68, who resides in Las Vegas, explains by phone. “He’s the only one who transcends all the generations. He was the most dominating artist in the industry of all time. People say, ‘Wait a minute, Bob, what about Michael Jackson? What about Elvis Presley?’ I say, ‘What about them? Michael Jackson died at 50. Elvis was dead at 42 …’

“Frank is just as popular today as he was eight years ago, 10 years ago, longer. He’s more well known in some foreign countries than he is in this country. I’m not only capitalizing on his popularity and iconic name. I want to do this because the music is so great and because he’s so relevant, as much now as he ever was.”

Anderson, whose uncle, Jimmy Stevenson, was music director for Soupy Sales, was able to meet Sinatra on several occasions — the first through his association with Sinatra’s daughter Nancy. Sinatra caught his act a couple of times and was supportive. Anderson says now that “we weren’t friends, we were acquaintances.”

“He was nice to me. I was in awe of the man and I’ve known the Sinatra family my whole career, so it felt good that they were all OK with what I was doing.”

Anderson launched “Frank: The Man. The Music.” in 2013, including an early performance at the Andiamo Celebrity Showroom in Warren. He incorporates arrangements by Sinatra musical director Vince Falcone, with makeup by Academy Award-winner Kazu Tsuji and Emmy Award-winner Ron Wild. The show’s three parts each focus on a different era and aspect of Sinatra’s career, with Anderson inhabiting his character via mannerisms and dialogue gleaned from careful study of Sinatra’s catalog of performances and videos.

“One of my biggest fears was how the press and the people and my peers in the entertainment business would respond to me — ‘Who does this guy think he is that he’s gonna come up there and become Frank Sinatra for an hour and a half?’” Anderson says. “So every single component of this undertaking has to be just the best. I can’t be Frank Sinatra if I don’t have as much as he had to work with.”

The reaction has been overwhelmingly in his favor. Reviews have been strong, with the Los Angeles Times declaring “Ol’ Blue Eyes is back” and Parade magazine noting that, “Some say you can’t re-create magic, but … Bob Anderson is proving otherwise.” Peers have been positive as well, with Tony Bennett offering Anderson some key advice.

“He sat in my dressing room for about an hour and said, ‘You did the whole show as Frank Sinatra and walked off the stage and nobody knew your name or said your name. You should close the show as yourself,” Anderson recalls. Bennett subsequently went home and sent Anderson an email scripting an ending to the show during which Anderson takes off his tie — which Sinatra never did — and says, “My name is Bob Anderson, and I hope you really enjoyed the show tonight.”

“And he was exactly right,” Anderson says. “It gets one of the biggest responses of the night, every time.”

Now Anderson is ready to take “Frank: The Man. The Music.” from stage to screen — and to bigger stages. Todd Fisher, son of Eddie Fisher and Debbie Reynolds, is directing the HBO special about Anderson’s production, while Eva Price is talking to Anderson about bringing the Sinatra show to Broadway. All of this makes Anderson “nervous,” but excited.

“I’ve had a lot of wonderful things happen to me in our business but never grasped that next step up the ladder,” he says. “These opportunities are either going to do that for me or it isn’t going to happen. But that’s OK. Nothing else I could’ve come up would take me further up the ladder than where I’ve been already, and I’m grateful for the career. I’m having a wonderful time, and I’m not about to quit.”